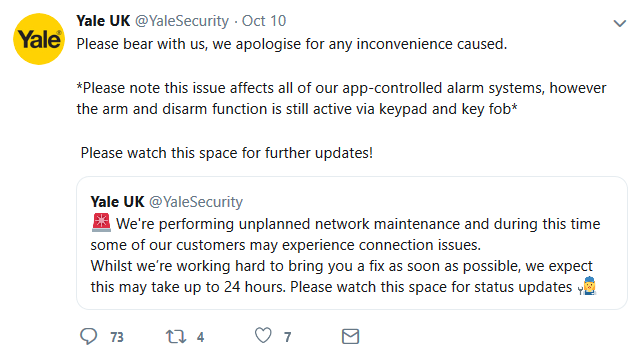 On Wednesday, October 10th, it was reported in the Daily Mail and The Register that the security company Yale had unplanned network maintenance which caused their cloud service to go offline for 24 hours.

Please bear with us, we apologise for any inconvenience caused.

*Please note this issue affects all of our app-controlled alarm systems, however the arm and disarm function is still active via keypad and key fob*

The reason hasn’t been specified (though, we’re guessing it’s likely DNS), but this caused a total outage for smartphone app customers.

This meant that those without their backup key, or did not have a keypad or keyfob, could not get into their property. Some people have claimed that they’ve been locked out of their house for over a day.

It’s very easy to become complacent, especially when backup systems like a spare key is in place – but when this isn’t available, or plans haven’t been followed, you can now be locked out of your own home.

Especially given that these systems are securing your most precious items, it would be foolish to rely on one system. Aside from having a keyfob, if there was a power issue or other internet problem; this might fail too.

If a secondary device such as a mechanical key can be used, then consider why even have the technological solution in the first place.

Yale say they have solved the problem with their systems – but it’s likely that many users will reconsider their security.